Tips and tricks to enhance your looks with your perfect colours.

Master Class in pills. Part I

You can play it safe and stick to neutrals, or the color of the year (because if everyone wears them, nobody will notice as much), or you can find what is the best colour palette that complements your skin tone.
Wearing the right colours can give you a radiant glow, while the wrong colour set of colors can make your skin look shallow, dull and tired.

You love a particular color that isn't quite right for you? No worries: use it as an accent. What is "Color Analysis"?


Seasonal colour analysis is a scientifically-based process that assesses the colours that are a part of an individual’s natural colouring, and identifies a palette of colours that is most compatible with the person.

If you go to a color analysis consultant, she will test a large variety of colors/drapes from different colour palettes (known as “seasons”) to determine their compatibility with your skin.
She will find out which color has a positive or negative aesthetic effect on you.

Each woman has "her" colours and each of us belongs to a "season". This is, essentially, the magic of  harmochromia.

A bit of History of the art of color analysis

The seed of color analysis was planted by German writer & philosopher Johann Wolfgang von Goethe (1749-1832) who realised the connections between colors, so he created the “color psychology”.

Albert Munsell (1858–1918) was an American painter and the inventor of the Munsell color system. Munsell classified colors according to value, hue, and chroma.

In 1928 Johannes Itten (professor at the Bauhaus University in Germany) took a step further when he concluded that portraits look better when certain colors were used in conjunction with specific hair and skin tones. He  published "The Art of Color" in 1961. He explored the principles of simultaneous contrast which Chevreul set forth in his 1839 treatise and proposed the notion of “subjective color”.

Robert C. Dorr (1905–1979), American artist, observed the harmonious effects of paint colors when using the same undertone of either blue or yellow. He created the Color Key System using color palettes where an individual’s complexion is either cool (Key I) or warm (Key II). Dorr was consultant in Hollywood and selected the best colors to bring beauty out of actresses or enhance dullness in "looser" acting roles.

Fashion Designer Suzanne Caygill (1911-1994), influenced by Robert Dorr’s Color Key Program, already in popular usage when Caygill, began focusing on color more intently. In the 1950s, Caygill starred in a self-improvement television program on fashion and relationships, “Living With Suzanne,” which aired on CBS in Los Angeles, and began to teach seminars in which she described her work on style, personality, line, and color.

Bernice Kentner, who had worked as a licensed cosmetologist since 1950, began holding lectures on color analysis in the early 1970s, and in 1978 published Color Me a Season, which went through several printings in the early 1980s.
She wrote, “It is possible to color coordinate your home so it is pleasing to the eye….So it is with the human body. The body itself is the background for all color that will be placed upon it. It remains our task then to find what color scheme our bodies fall into. As with the walls of a room we must determine what color our skin is.”

Finally, psychologist Carole Jackson wrote the book “Color Me Beautiful”, which became wildly popular in the 1980’s. In it, she simplified Caygill’s seasonal system and made it vastly more straightforward for everyday women to shop for appropriate clothes, accessories, and makeup. 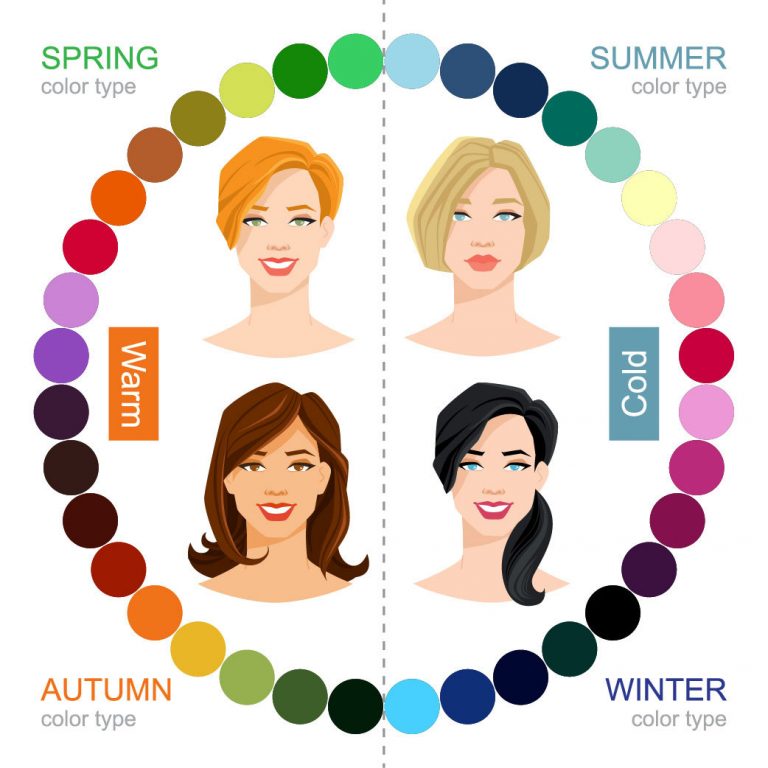 The first step to make is to define whether your natural colours are warm or cool.
Discover the undertone that gives definition to your looks.

Skin undertone is determined by three elements: hemoglobin, carotene, and melanin. While skin overtone can change based upon factors such as sun exposure, illness, or blood pressure, your undertone is defined by genetics and will never change.

To determine your undertone perform these simple tests:


1) Foundation Test
The easiest and most accurate method involves dabbing some pink based foundation on one cheek, and some yellow one on the other. Then spread the foundation cream evenly on each cheek. Finally, look at which one blends in and which one looks painted on. The one that blends well is your match.
Pink is equal to Cool, yellow is equal to Warm.

2) Gold - Silver Test
Hold up gold and silver jewelry next to your face (or wrap around your face a gold and a silver fabric). Which one makes you look brighter and healthier and which one makes your skin more yellow, red, uneven, or gray? If gold gives you a lift, you're warm. If silver is better, you're cool. 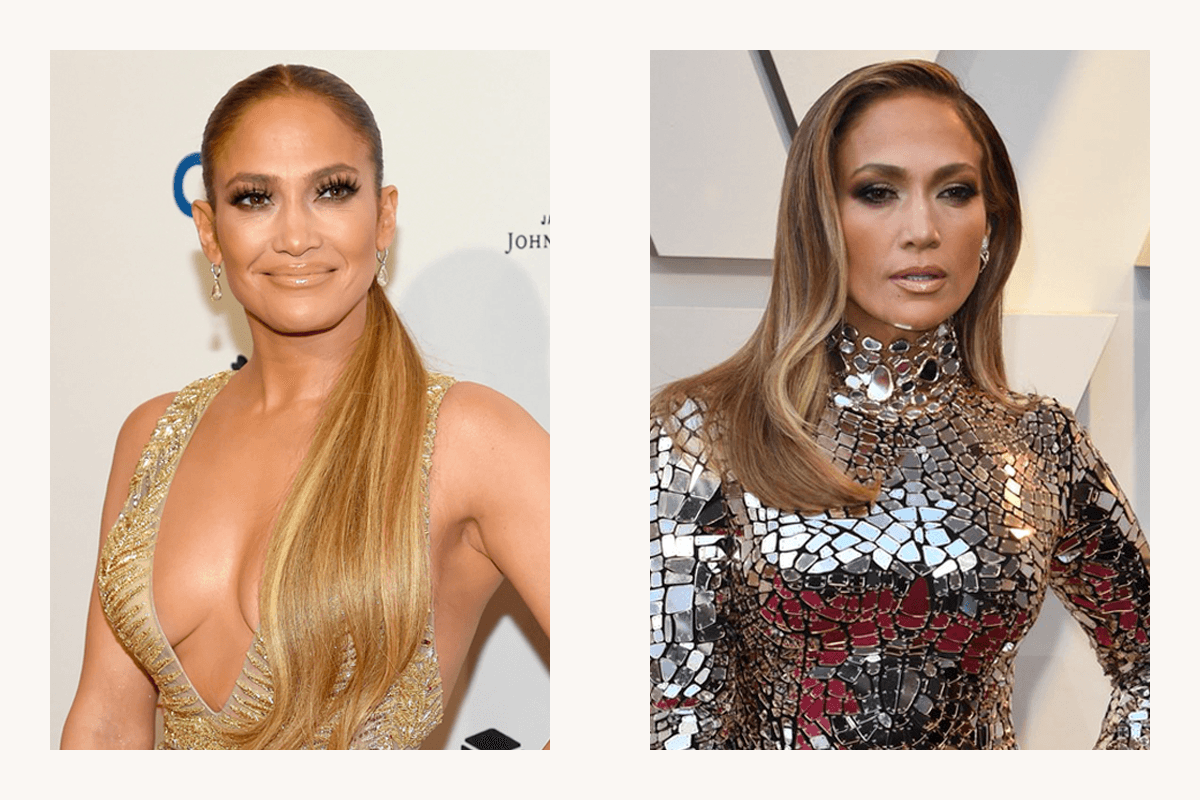 3) The Vein test
This is one of the easiest tests to conduct on yourself, though it’s not always easy to interpret. You just look at the veins on your wrists or under your eyes to see if they appear to be more purple/blue (cool) or green (warm), or blue-green (neutral) 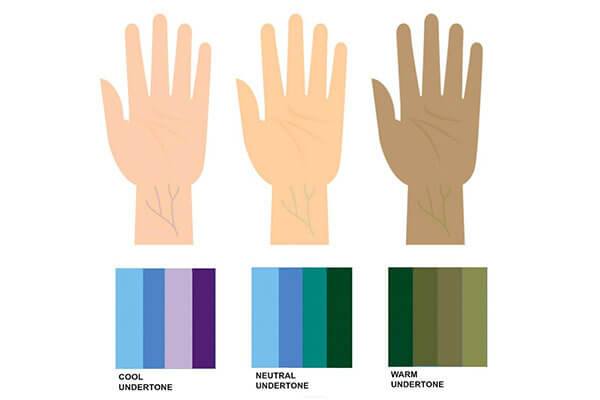 4)  The sun test
Another way to find your skin's undertone is to gauge how it reacts to the sun. Olive-skinned beauties who tan easily generally have warm skin tones. Women with pale skin who burn in the sun, are usually cool. But that's not to say that those with dark skin that don't burn can't be, too. If you're neutral, you may fall into either group.

5) The hair Test.
What is your natural hair colour?
Fair hair:
A. Hay blond or golden blond, copper blond or natural red.
B. Ash blond. When I was a child I was even lighter, almost platinum blond.
Dark hair:
A. Dark chestnut but not ink black, golden or copper brown.
B. Cold, dark brown or dark brown, almost black.
A.  Does my hair have any "golden" tones?
B.  Would I describe my hair "ashy"?”

If you dye your hair, what happens to your hair when it starts washing away?
A. It get lighter, but it doesn’t get purple highlights.
B. It gets “red” highlights and they won’t go away: in natural light it looks almost mahogany.

If your answers are mostly A, you have warm, solar tones, on the contrary, you answered mostly Bs you have cool lunar tones.  Jet black and platinum blonde are usually cool.

Note: Red hair is tricky! You’d think that orange being a warm color that redheads would have warm undertones, but that’s not always the case. If your hair is bright orange or strawberry blonde, you’re probably warm. If it’s more auburn, you might be cool.

Most of our shirts are available in a relaxed fit. This "Boyfriend" style is comfy and gives you a carefree easy-going look

Tailored shirts with front darts are feminine and make you look slimmer. If you are for this tapered fit see the full range

Comfortable and super casual, this style is easy and versatile. Pick one for an understated look or a fun day at the beach